This article is a bit of my personal
feelings toward recent development that is happening in
Indonesia. How Microsoft is so agresive and ‘spectacular’ in
penetrating major aspects of Indonesian people’s life, such as in
businesses, government, and education. This article hopefully can
also be a reference for those who are still hesitate in using
Linux and Open Source Software.

We are seeing interesting development
in the first part of 2005 in Indonesia, regarding the battle between
Microsoft and Open Source Movement, especially Linux. Those are such
as:

Now, what is so interesting about the
above mentioned matters?

Linux as a server is OK, now how
about as a desktop?

Linux as a server is proven to have
good records. Linux servers are know to be reliable, stable, highly
perform, and of course, more economical. But how about the use of
Linux in desktop?

Previously, the use of Linux in desktop
was still very limited and burdened with limited good hardware
drivers, the appearance of not so good of it’s Xwindow, the office
application that is not so intuitive, etc.

But, since the launch of Linux Desktop
Initiative on January 20, 2004 by Open Souce Development Lab, now the
development of Linux desktop is very encouraging. What is OSDL? They
are a global consortium whose aim to accelerate the adoption of Linux
(www.osdl.org).

I experience this myself. Starting when
I first try Redhat 7.3 in 2001. Many hardwares were not detected by
it such as graphics card, internal modem, printer, scanner. Really,
learning Linux in that time was mostly using text mode only.

In the beginning, I used Linux on my
desktop PC only, but when in the end of 2003 I managed to buy a
notebook, I said to myself, If I don’t use Linux everyday, how I
can know it better and love it more? Finally, I made a dual boot
on the notebook, with partition of 50% MS Windows and 50% Linux. But
after a couple of weeks, the partition became: 17.5% MS Windows, and
82.5% Linux 🙂 Now, MS Windows is rarely booted in my notebook.

Linux Xwindow is not good? On the
contrary, it’s fabulous.

A few years ago, this could be true,
but in the last couple of months Linux Xwindow has becoming better
and better. Especially since the release of KDE 3.4 and Gnome 2.10.
What, there are many Xwindow system? KDE and Gnome? Yes! This is the
unique of Linux comparing to MS Windows, we are FREE to choose our
own desktop environment. There are KDE, Gnome, Windowmaker, XFCE,
enlightment, etc. Of which with their own characteristic.

Back to our concern, is Linux and Open
Source experiencing defeats and decreasing? I don’t think so.

The following is the statistic of
arinet.org’s visitors based on Operating System and Browsers used. 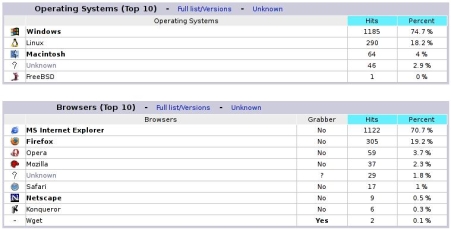 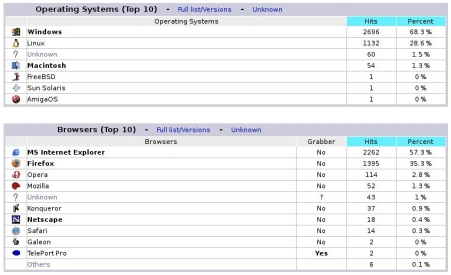 It’s not a general representative of
what is actually happening in the Internet, but at least from
arinet.org’s perspective it’s enough.

It seems that the Open Source
movement’s urge "If you can’t or don’t want to leave MS Windows
now, at least try to use other FOSS alternatives on the applications"
is quite working.

However, there is still a long road to
go for Linux and Open Source. Microsoft is a very big company and has
unbelievable big financial resources. As we know, Bill Gates is the
richest person on this planet for the last 7 consecutive years.

This is also an interesting remark by
Steve Ballmer (Microsoft CEO) in 2001, "Linux is a cancer
that attaches itself in an intellectual property sense to everything
it touches,"

And, like a cancer, slowly but sure,
Linux keeps growing in the grass-root level, among the lowest level,
among idealists, who have never tired of spreading the spirit of Open
Source and Linux in particular.

Knowledge belongs to Everyone.

v.1.0 by ari_stress a.k.a tiger74 a.k.a
Fajar Priyanto. Jakarta, 10 July 2005. fajarpri at
arinet dot org. He is a Microsoft Certified
Professional, who fell in love with Linux. Works at an educational
institution in Jakarta.

This article can be downloaded at
http://linux2.arinet.org.